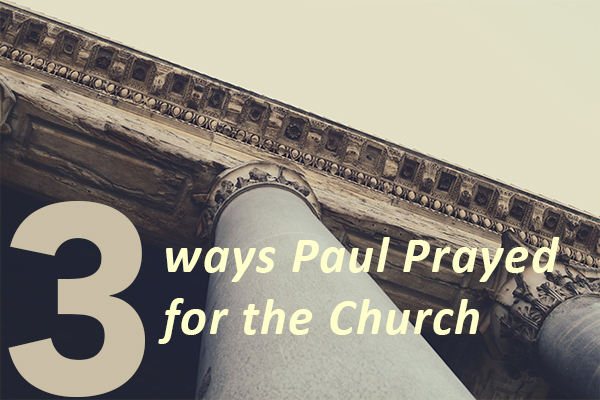 When Paul thinks about connecting with these Christians that he hasn’t met, he shares with them the most accessible point of Christian fellowship. He prays for them.

He shares with the unmet Roman Christians 3 ways that he has been praying for them:

First, he gives thanks to God for them. (Romans 1:8). Paul is grateful for this church. But he isn’t just happy that they are around. He acknowledges the source of this church, and the source of the benefits and blessings that this church provides--- He thanks God, through Jesus Christ. You see, the gospel is always close by in Paul’s thinking. He is not just generically happy. He is thankful to God, praying because he has access to the Father through the death and resurrection of the Son--- Paul’ Saviour.  Paul’s gospel is always the channel of Paul’s prayer.

What is he thankful for? He is thankful for their reputation as being a church characterized by faith. Imagine that. A church is famous for their faith.

What is faith? My sons told me I should use a definition of faith that we found in the comic book, Luther, the Graphic Novel.

“Faith is the living, daring confidence in God’s grace, so sure and certain that a man could stake his life on it a thousand times” - Martin Luther according to the comic book. I checked the reference. The definition comes from Luther’s Preface to his commentary on Romans.

So Paul is thankful for the Roman church’s faith: “their living, daring confidence in God’s grace”

The Roman congregation was in the center of the Roman Empire, surrounded by the debauchery of the city known as The Great Prostitute.

This local church in Rome was famous for their faith.  That is a good reason for Paul to Give thanks to God.

Second, Paul interceded for them. Paul prayed to God, for their benefit. And he did this a lot. At every instance of his regular prayers, he always prayed for the Roman church. He never stopped praying for them.

For God is my witness,  whom I serve with my spirit in the gospel of his Son,  that without ceasing I mention you always in my prayers, asking that somehow  by God’s will I may now at last succeed in coming to you. (Romans 1:9-10)

‘Without ceasing’ is not the sense of a vague, undefined, mystical state that you remain in. It is the idea of regular, habitual prayer. Prayers that are set aside, not extemporaneous. Prayers that are planned, regularly, not just the emergency ones.

And at every regular time of prayer, Paul never stopped praying for the Roman Church. This shows how important prayer was for Paul’s missionary role.

Third, Paul  shared with the Romans the content of what his repeated request to God was. He requested that “somehow  by God’s will I may now at last succeed in coming to you” (Romans 1:10) .  Paul did not have a specific guarantee that he would get to Rome. But he did know that he would preach the gospel before kings (Acts 9). He would speak to King Agrippa (Acts 26) , before being sent to Rome and presumably appearing before Caesar himself.

But Paul always presented his desires to God, so that if God answered his prayer, his desires would be met in God’s way.

So Paul’s Gospel is the channel of his prayers.

Paul’s Gospel is the motivation for his prayers

Paul’s Gospel is the goal of his prayers.