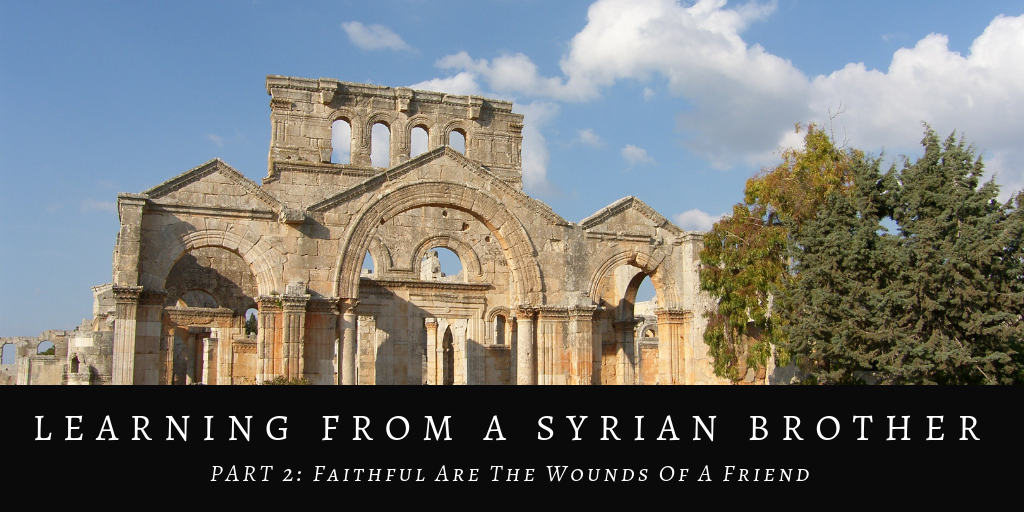 [NOTE: This Sunday, during our Lord's Supper service, we will be taking up a special offering that will be dedicated to helping the advance of the Gospel among Calgary's Syrian refugees. These articles are intended to help you understand the needs of this community and of those like our brother who are seeking to reach them]
Last week, a number of pastors from around the Calgary area gathered at Calvary Grace for a monthly Gospel Coalition Prairies Pastors’ Meeting. At this event, we were blessed to hear from a Syrian Baptist minister now serving in Calgary. Some of you will remember this brother's presentation on evangelism to Muslims, which he gave to us a couple of months ago. Just like at that meeting, everyone present at the TGC Prairies pastor’s gathering was deeply encouraged and convicted by his presentation.

This pastor covered a lot of ground in his talk, and so I’m hoping to summarize some of the main things he said that struck me as valuable for all of us to consider. Last Friday’s newsletter reviewed his focus on training men for ministry and being a blessing to other churches. In this article, we’re going to look at his somewhat stinging critique of Canadian evangelicals.

One of the most endearing things about our Syrian brother is his forthright, even blunt, honesty. As part of his own presentation on problems in Syria, he mentioned, alongside the problem of everyone being against Christians and the problem of need, a third problem—a lack of stability. Later in the conversation, when comparing the situation in Syria to that here in Canada, he pointed out that Canada’s churches simply don’t face the same needs and instability. Churches here, he points out, “are not rich, but they can find supplies easily.” He then made the following rather stinging observation: “I wonder how much Christians care about ministry, compared to their own needs.” He then pointed out that the relative stability we enjoy here in Canada might be breeding a sense of complacency: “One friend said to me that he wonders if this stability is a reason that ministry is not advancing in Canada.”

Another observation he made repeatedly, in different parts of his conversation, is our culture’s obsession with not giving offence to others. In contrasting his own culture’s openness to conversation about religious matters with Western and Canadian skittishness about raising the subject with others, he referred to the latter (and NOT positively!) as “the Canadian way”—as if from his own perspective, our fear of talking about faith is almost unique to and definitional of our culture. In another context, he mentioned how new immigrants from his part of the world, when they first arrive in Canada, are open to being approached with the Gospel and to talking about God and Jesus—but that once they have been here a while, having been “Canadianized,” they become hardened and unapproachable like the rest of the culture. And lest we dismiss this as just one man's opinion, a Brazilian brother, one of the pastors at the meeting, echoed this observation, saying that “it’s important to reach newcomers when they first arrive, before Canadian culture hardens them.” Our Syrian brother also shared his opinion that Muslim organizations are deliberately taking advantage of this cultural commitment to avoidance of offence to manipulate Canadian laws and leaders, and to teach new Muslim immigrants about the Canadian obsession with offence and discrimination, all in order to insulate their communities from criticism and outreach. It’s also interesting that this man, who grew up under and has personally seen every level of governmental persecution in his ministry, also pointed out to our group of Canadian pastors that he thinks Canada’s government is turning against us.

Taken together, I think our brother from the Middle East views the very politeness that Canadians seem to pride themselves in as a profound spiritual weakness in the Canadian church—one that we are not only profoundly foolish to assume will be extended to us by others, but even worse, one that cripples our evangelism.

I think all the pastors present left that meeting deeply convicted of the need to pray for boldness in ministry. Our Syrian brother lamented churches that, in seeking to help Syrian immigrants, “do it all backward. They offer to bring the family to mosque, help them buy halal food”—all in hopes that sometime, later, down the road, they might somehow obtain permission to talk about the Gospel. The problem, as was already pointed out, is that by that point they will have adopted—or been coached by the Muslim community to use—the Western unwillingness to offend anyone as an excuse to avoid that very conversation. The practical result, in his words, is that “they come into your church and your house and you send them away empty?” And this, in his view, “would be a crime.”

The aforementioned love of stability, and this unwillingness to give offence, are not merely closely related problems; they are, rather, two sides of the same coin. They are both different expressions of the same, fundamental unwillingness to die to ourselves and take up the cross. In our brother's words, “Canadians need to learn to pay the price. There is no ministry without price.” Evangelism and outreach—indeed, simply believing and publicly confessing what the Bible teaches—all, in our culture, require a price to be paid: the price of awkwardness or embarrassment, rejection or hostility. And prioritizing the work of the Kingdom (that is, making disciples, sharing the Gospel) requires a price as well. We can’t expect to make an impact in our culture without being different from it. And we can’t expect that being different from our culture won’t result in a hostile reaction from it.

Let’s pray, then, that the Lord would make us bold, that he would cause us to count stability and plenty as relatively unimportant, and that he would move us to sacrifice our reputations, our comforts, our personal preferences, and even our safety in order to make disciples of Christ and build up his Church.
Tweet
Tweet

Order of Service May 31 No Other Gods