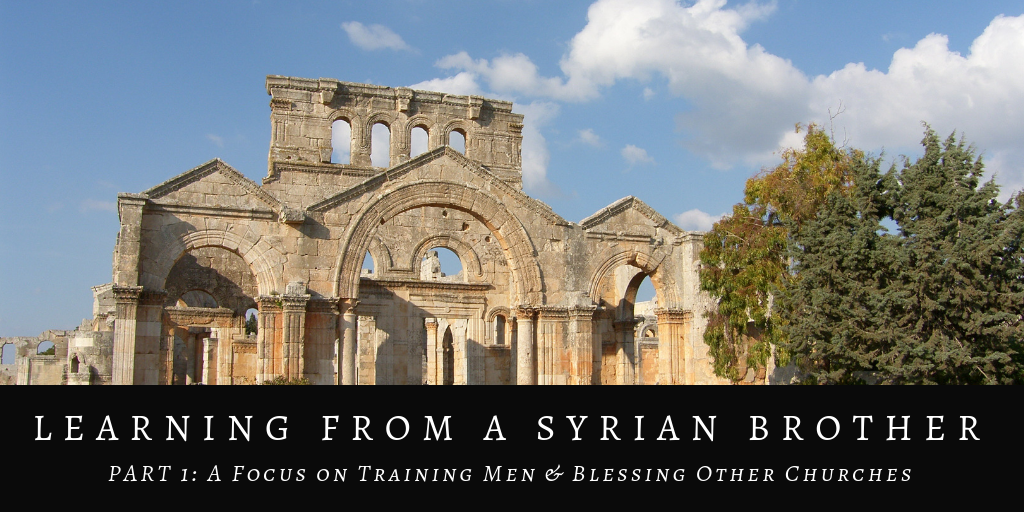 Yesterday, a number of pastors from around the Calgary area gathered at Calvary Grace for a monthly Gospel Coalition Prairies Pastors’ Meeting. At yesterday’s event, we were blessed to hear from a Syrian Baptist minister now serving in Calgary. Some of you will remember this brother’s presentation on evangelism to Muslims, which he gave to us a couple of months ago. Just like at that meeting, everyone present at the TGC Prairies pastor’s gathering was deeply encouraged and convicted by this pastor's presentation.

He covered a lot of ground in his talk, and so I’m hoping to summarize some of the main things he said that struck me as valuable for all of us to consider.

A Focus on Training Men and Blessing Other Churches

Our Syrian brother gave a brief summary of his life before coming to Canada, and particularly of his ministry in Syria and Lebanon. Growing up in Syria in an Orthodox Christian background, he came to Christ in 1981 and has held a firmly evangelical faith ever since. Not long after, he felt deeply convicted that Christ demanded an “all of life” ministry—a lesson that I believe every Christian, no matter their role in the church or time in the faith, needs to hear and obey! For this Syrian Christian, he sought to obey that command by pursuing pastoral ministry. For around 10 years afterward, he pastored in one of Syria’s largest cities. He stressed to us that his flock was not large, but in what I felt was a very “First Thessalonians 2:19” sense (“What is our hope or joy or crown of boasting before our Lord Jesus at his coming? Is it not you?” He emphasized that in looking back on that time he is most satisfied about the way many of his small group of believers are still in ministry to this day, leading and serving others.

During this first phase of ministry, he laboured without the benefit of formal theological education. Eventually, the Lord made the way for him to attend seminary in Beirut, and there he stayed for another 11 years or so—not just attending school but serving in church, orphanage, and radio outreach ministry. Upon his return to Syria in 2002, he resumed pastoral ministry in the same city—and what encouraged me in particular was where he placed his ministry priorities. Besides aggressive evangelism in the majority Muslim villages around the city, distributing New Testaments and playing evangelistic films, this pastor also pursued making theological education available for Syrian Christians. He participated in a seminary extension program and served on its board for some time. This brother was particularly encouraged by the fact that every city in Syria which had an evangelical church had students in this program.

For me, I was encouraged by his emphasis on training leaders and investing in ministry that benefitted other churches—whether it was his time in Syria labouring on making seminary extension programming available, or doing radio ministry in Lebanon, or his current project here in Calgary creating curriculum on Islam for Canadian churches. Even the free and quick way he offered himself as a translator to help some of the TGC Prairies pastors who are dealing with Arab refugees showed the same spirit. Our brother not only understands but exemplifies a spirit that sees a local church and its pastors as not merely existing for themselves, but for the benefit of other churches for the sake of the Gospel.

What struck me in particular was that a man of his background—coming here as a refugee, fleeing civil war and religious persecution—arrived here with these values already developed. It seems to me that it would be easy for Christians, churches, and pastors facing opposition to “bunker down” and tend to their own needs first rather than seeking to expose themselves by helping others. However, the experience in Syria which formed this man into the pastor he is today seems to have taught him the critical importance of doing the opposite.

As our brother said to us at one point, “There is no ministry without price.” That was in the context of a discussion of his observations of the Canadian church—which, God willing, I’d like to summarize and discuss next time.