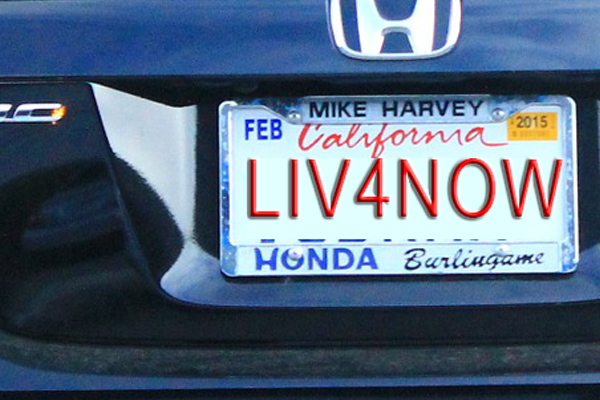 As I was driving to work this week, I passed someone on the highway with a custom license plate. It read: LIV4NOW. It struck me as I saw it that the saying is a very fitting way to summarize the spirit of the age and the wisdom of the day. The logic behind such statements is very simple: if this is all there is, then I had better start enjoying myself because I don't know when it's going to end. Paul, for the sake of argument, going along momentarily with the similar wisdom of his day, said in 1 Corinthians 15:32: “If the dead are not raised, 'let us eat and drink, for tomorrow we die'.” If this is all there is, then it only makes sense to LIV4NOW. But Paul wants to be very clear: “But in fact Christ has been raised from the dead, the firstfruits of those who have fallen asleep. For as by a man came death, by a man has come also the resurrection of the dead. For as in Adam all die, so also in Christ shall all be made alive.” (1 Corinthians 15:20-22)

You can see then, that the reality of the resurrection of Jesus Christ is the linchpin in all of this. Further than that, the reality of the resurrection of Jesus Christ, and his ascension to the Father's right hand, has ensured his second coming; along with the resurrection of all to judgment.(Revelation 20:11-15)  As Jesus himself said on multiple occasions throughout the gospels, speaking of his second coming, even before his resurrection: “and you will see the Son of Man seated at the right hand of Power, and coming with the clouds of heaven.” (Mark 14:62) Commentator James Boice has pointed out that when you average it out in the New Testament, 1 verse out of every 25 speaks of the Lord's return. Out of the 260 chapters in the New Testament, Jesus second coming is mentioned 318 times. The whole thrust of the New Testament is moving towards this reality, warning people of the judgment that is coming, and beckoning all to flee to Jesus Christ for refuge.

This reality begs the question: how then shall we live? Well, in 1 John 2:28,29 the key is the same as it was in last weeks article about not being deceived into false beliefs regarding who Jesus is. John says in verse 28: “And now, little children, abide in him....” The key all the way along in the Christian life is to abide in Christ. To abide in his word and to continue to do so. To abide in the vine as your very life source, knowing that apart from him you can do nothing. (John 15:1-5) John goes on: “abide in him, so that when he appears we may have confidence and not shrink from him in shame at his coming.

Do you think about the return of Christ? Will you have confidence to not shrink from him in shame at his coming? If you continue to abide in Christ, it will change the way you spend the life that has been gifted to you. You will begin to find yourself living in light of eternity and not for the moment. You will use the talents that have been granted to you in the service of your Master, out of overflowing gratitude to Him for the eternal life that He has given you in Christ. (Mathew 25:14-30) At the end of your days, when you stand before the judgment seat of Christ, you will then be able to stand before him in confidence because you will bear the family traits that he recognizes; because after all, he gave them to you, namely, his righteousness, which evidenced itself in a righteous life that was lived for him, rather than a life wasted on the momentary and fleeting pleasures of this world. (1 John 2:29) The flipside of this, of course, is failing to abide in Christ in this life, leading to shrinking from him in shame at his coming. You do not want to find yourself in that position on that day.

“Behold, he is coming with the clouds, and every eye will see him, even those who pierced him, and all the tribes of the earth will wail on account of him. Even so. Amen.” (Revelation 1:7)

“Behold, I am coming soon, bringing my recompense with me, to repay each one for what he has done.” (Revelation 22:12)