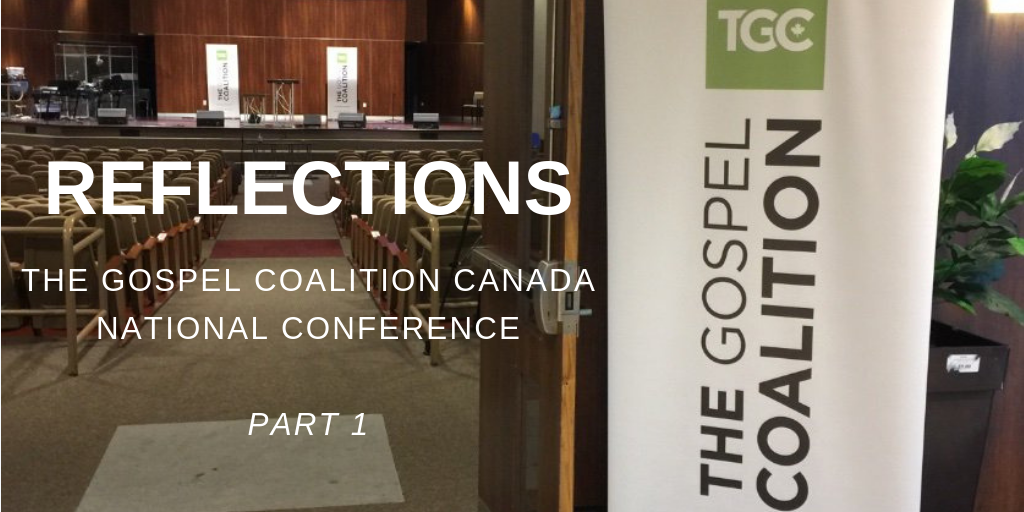 Last week, alongside Pastor Clint and Christel Humfrey and our Deacon Oly Ratzlaff, I was blessed to be able to attend The Gospel Coalition Canada’s inaugural National Conference in Mississauga, Ontario. The three days of the conference were a whirlwind indeed, and I could probably write pages on what I learned and how I was encouraged, convicted, and exhorted! In a couple brief articles, however, I wanted to highlight a few key things that I hope will be a blessing to our church.

The Encouragement of Knowing We Are Not Alone

I could be wrong, but I believe there were more than 700 people at the conference. That may not sound like much, especially compared to the many thousands who attend evangelical conferences like T4G in the United States—until one remembers that not only is Canada approximately 1/9th the size of the American people, but also that the evangelical church in Canada is (at best) only a third the relative share of the country’s population compared to its U.S. counterpart. This means that TGC Canada’s conference was, as a representation of the Canadian church, equivalent to an American conference drawing 18,000 Christians.

This staggering fact shows the desperate hunger of Gospel-minded Canadian evangelicals for fellowship with like-minded Canadians, and the way God is using TGC Canada to begin addressing that need. Walking the halls of the Light Presbyterian Church in Mississauga, listening to sermons in English and French, talking with brothers and sisters from New Brunswick and Ontario and Newfoundland and Quebec and Alberta, renewing Gospel friendships with brothers and sisters like Terry, Juanita, Anne, Josh, and Marie-Michelle Stauffer, or Paul Martin, or Mez McConnell, Matthew Spandler-Davison, and Aileen Challies of 20schemes, or our friend Steve Bray and his retinue of enthusiastic Newfoundlanders at Mile One Mission, all served to encourage me greatly. As our dear brother Oly put it more than once during the trip, it truly felt like God’s encouraging rebuke to Elijah who, feeling all alone (“I, even I only, am left!”), was reassured that “I will leave seven thousand in Israel, all the knees that have not bowed to Baal” (1 Ki. 19:14, 18). Even as our culture increasingly is turning against us, brothers and sisters, by God’s grace we are not alone.

The Blessing of Churches that Serve Other Churches

Put bluntly, I would never have been able to go to TGC Canada if Calvary Grace—that is, if you—had not sent me. This was a privilege for which I am profoundly thankful, to God, and to you all through whom he worked. It’s certainly fair to ask what the value to Calvary Grace Church is of dispatching its pastors on a trip across the country, but I firmly believe the values and spirit of our church, which made that sacrifice possible, are biblical and God-honoring ones. And being at TGC Canada was encouraging in that it showed God is cultivating the same self-sacrificial, other-church-helping spirit among many other congregations. Churches from across Canada similarly sacrificed to send their members to bless and be blessed by others. The conference itself was organized by a small TGC Canada office that exists only because of giving from churches like ours. The massive Korean church in which we met, Light Presbyterian Church, is not even a TGC Canada church—but out of a desire to bless other believers they freely made their facilities available and bent over backwards to help us. One of their people, a young man named Sam, even drove Oly and me back to our hotel!

On several occasions we were able to “pour into” others from different parts of the country, whether it was a conversation I had with a young pastor and his wife facing structural and ecclesiological problems with their church in Quebec, or sharing with my counterpart at a church in Ontario my perspective on how an associate pastor relates to his senior pastor and prepares to possibly lead a church himself, or Clint contributing our church’s hard-earned lessons to a church planting panel discussion or sharing in to the whole conference how a providentially timed email from someone in our own church was a blessing to him, or Christel’s unforgettable description of what God taught her through suffering in a breakout session. And I firmly believe we received as much or more back from others. From gleaning insights on church planting from folks like Dan McDonald or Mez McConnell or Paul Carter, or sitting with a sister in Christ, Deina Warren, a constitutional lawyer who over ten minutes gave me a “crash course” in some of the main legal problems facing Christians in Canada, or learning more about a growing initiative by the Canadian Biblical Counseling Coalition to promote and resource biblical counseling across Canada, to—and perhaps most important of all—being fed so richly by the preaching of the Gospel of Mark in the plenary sessions, preaching that not only nourished our souls but stoked a fire within to better grasp and unpack the biblical text for all of you, I think we (and, God willing, through us, all of you) have been and will be greatly blessed.

God willing, I’ll have more reflections on our time at TGC Canada in next week’s newsletter!