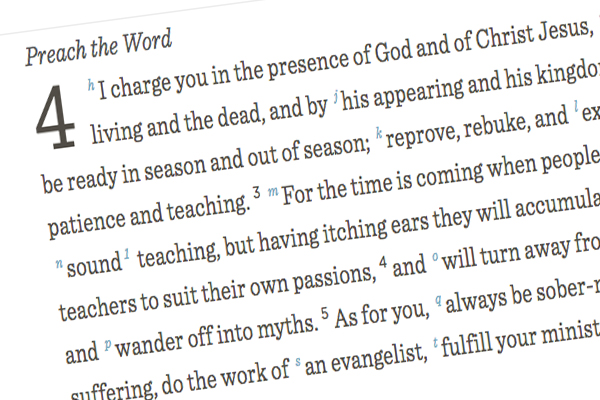 The fourth paragraph of the Second Helvetic Confession of 1566, written by the Swiss Reformer (and successor to Ulrich Zwingli) Heinrich Bullinger, begins with this famous title: “The Preaching of the Word of God is the Word of God.” In that paragraph, Bullinger says the same thing in different words: “Wherefore when this Word of God is now preached in the church by preachers lawfully called, we believe that the very Word of God is preached” (emphasis added).

Looking back at church history, however, we see Bullinger’s view was hardly unique. Martin Luther said the same thing in almost the same words: “one must see the word of the preacher as God’s Word” (Luther’s Works 22, 526). John Calvin declared in one of his first writings, “I demand only this, that faithful people be allowed to hear their God speaking and to learn from his teaching” (emphasis added). In the fourth book of his Institutes, Calvin makes the same point about the ministry of the Word in the church: “…among the many noble endowments with which God has adorned the human race, one of the most remarkable is, that he deigns to consecrate the mouths and tongues of men to his service, making his own voice to be heard in them“ (emphasis added). Brian Chapell states that as preachers “we do not merely speak about Jesus to his people; we speak as Jesus speaks to his people” (emphasis original). J.I. Packer writes that “Christian preaching is the event of God himself bringing to an audience a Bible-based, Christ-related, life-impacting message of instruction and direction through the words of a spokesperson” (emphasis original). Phillip Ryken argues that “An expositor….himself is only God’s mouthpiece, speaking God’s message into the ears of God’s people, and thus into their minds and hearts.” A crucial claim of Greg Scharf’s book Let The Earth Hear His Voice is that “God actually speaks through people who speak in his name.” Indeed, the view that “the Word of God preached is the very Word of God” is the Protestant view of preaching.

Now, to be clear: none of these theologians are arguing that the preacher is therefore infallible or that the sermon is thus perfect or on par with Scripture. Bullinger, anticipating the objection, goes on: “the Word itself which is preached is to be regarded, not the minister that preaches; who, although he be evil and a sinner, nevertheless the Word of God abides true and good” (emphasis added—ouch!) Calvin, similarly, states that “Therefore, to teach us that the treasure offered to us in earthen vessels is of inestimable value…God himself appears and, as the author of this ordinance, requires his presence to be recognised in his own institution….Those who think that the authority of the doctrine is impaired by the insignificance of the men who are called to teach, betray their ingratitude.”

In other words, the preacher, who is “evil,” “a sinner,” “insignificant,” and merely an “earthen vessel,” is hardly inerrant or perfect, and does not “impair” this doctrine. Rather, the Reformers made the same distinction Chapell does: “The humble answer lies in discerning the source of any message that seeks to present the truths of a biblical text….the frailties and faults of preachers do not change the essential nature of the treasure they steward. To the extent that their preaching is true to Scripture, God’s Word yet echoes in the church.” This is why, then, expositional preaching is so crucial for the life of the church. When a preacher sets out, from the beginning of his preparation, to ensure that the message of his preaching is the message of the text, he is doing everything in his power to ensure that what he preaches is indeed the very Word of God.

Bullinger, then, was merely one of the first to state what has for hundreds of years been the Reformed doctrine of preaching. An even more important question, though, is this. Is the Reformed view the biblical view? Yes, it is. Paul commends the Thessalonian Christians for receiving the Gospel in just this fashion: “And we also thank God constantly for this, that when you received the word of God, which you heard from us, you accepted it not as the word of men but as what it really is, the word of God, which is at work in you believers” (1 Thes. 2:13). And in case someone were to object that Paul, being an apostle inspired by God, cannot be a model for preaching today, notice that Paul used the first-person plural (“we,” “us”), meaning he is including his fellow-worker Silas—who wasn’t an apostle!—as one whose “word” was received “not as the word of men but…of God.” Similarly, Paul tells the Corinthians that in this “ministry of reconciliation,” proclaiming the Gospel, “we are ambassadors for Christ, God making his appeal through us” (2 Cor. 5:20, emphasis added). Note that this is not merely about preaching in the church, either—Paul is saying that every time any Christian believer summons the lost to be reconciled, God is speaking through that believer (again, to the extent that the Christian is being faithful to the text)—but it certainly includes preaching. It is for this reason that elders are given the charge Paul gave to Timothy: “I charge you in the presence of God and of Christ Jesus, who is to judge the living and the dead, and by his appearing and his kingdom: preach the word” (2 Tim. 4:1-2); Paul doesn’t say “preach about the Word” or “preach according to the Word,” but tells Timothy that the very thing to be preached, the very nature and content of his preaching, is to be itself God’s Word.

This is a humbling truth for preachers; it means that the only thing a preacher has left to “take credit for” is error, if the preaching is, to the extent that it’s true, God speaking through him! But it is also humbling for the listener. If the right preaching of the Word is God speaking to us, then when we gather for worship on Sunday, we are indeed gathering to hear the Living God speak to us. That has staggering implications for how we approach worship. Indeed, this truth shapes the doctrine of the Christian life as a whole. Next week I’ll look at some practical implications of this truth for us as listeners.