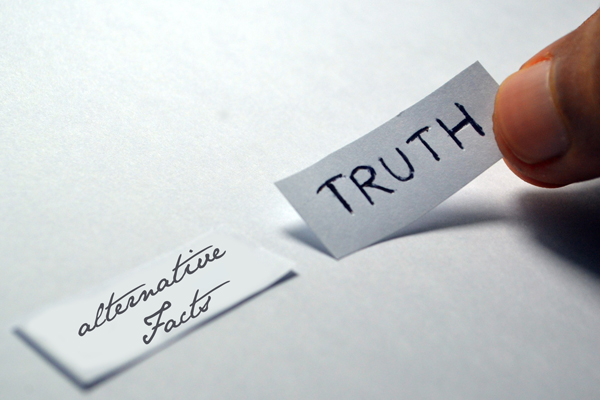 In early February Rick Mercer did a rant on Fake News. In his rant he noted that as a society we may in fact be getting dumber. In days gone by people would be shocked that published information would be deliberately untrue. Dr. Kellie Leitch, running for the PC leadership, has a campaign manager who brags that he spreads false news on her behalf. It wasn’t too long ago that the ridiculous phrase “alternative facts” was coined by Trump’s staff. Websites are deliberately falsified and made to look good. Today with a wealth of information at our fingertips we may still be getting dumber, but it is not because we don’t have access to information, but because lies are shamelessly presented as truth.

God is the originator of truth (Psalm 43:3) and like the psalmist, we desire to be led by the truth. Anything less than the truth is detestable to God and something he hates (Zec. 8:16). Without a reverence for God there can be no revering truth. It just doesn’t matter. Whether something is true isn’t as important as if it serves my purpose and gets the job done.

It used to be that our character was the center of who we are. It was that enduring quality that could be counted upon, even when alone. With the decline in truth, enduring character doesn’t matter. You can be who you want to be without a moral center. As Os Guinness points out in “Time for Truth”,

“the emphasis is now on surface, not depth; on possibilities, not qualities; on glamour, not convictions; on what can be altered endlessly, not achieved for good; and on what can be bought and worn, not gained by education and formation. To be a person is therefore to be a project.”

In this day of pseudo-realities and pseudo-substance, we need to uphold the truth of God and the glories of the gospel. We are not reinventable and insubstantial, but rather those who are created in the image of God to reflect him and his truth.