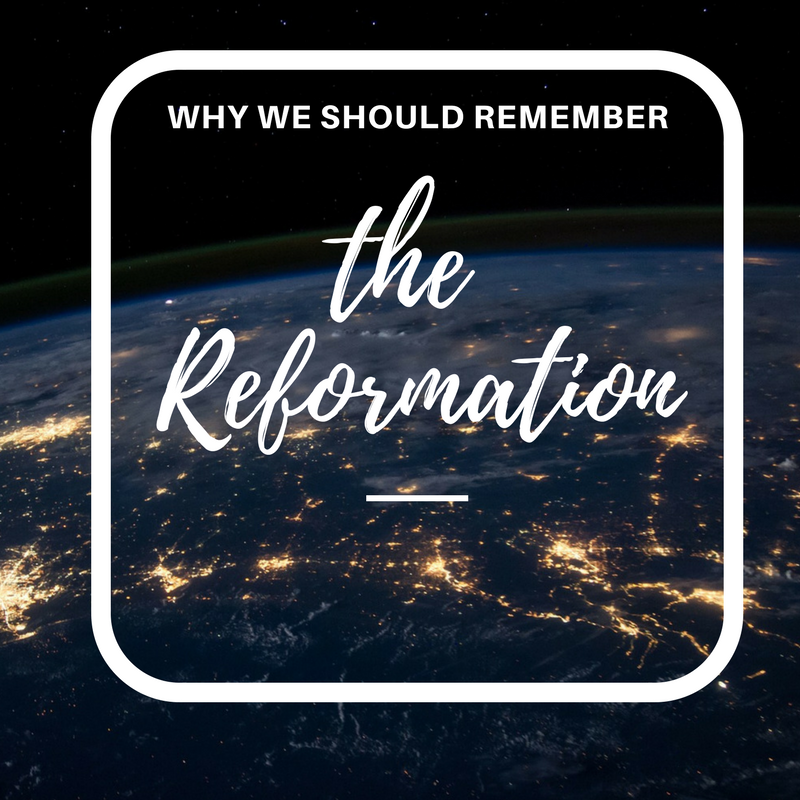 This week I went to a funeral, or what goes for a funeral these days called a “celebration of life.” As I listened to a few speeches, the echo of Ecclesiastes 1:11 came to mind, “there is no  remembrance of former things, nor will there be any remembrance of later things  yet to be among those who come after.”  If a brief life is forgotten soon after the potato salad has been eaten, then why should we bother with remembering the 500th anniversary of a German monk’s bulletin board posting?

Here are three reasons why we should remember the Reformation:

The Reformation reminds us that because of sin, we are always in need of reformation. Prior to the 16th century in the West there was no Protestant church, there was only ‘the church’. If you were a professing Christian in medieval times, you were a Roman Catholic. Yet the corruption of doctrine and practice by the church of Rome was so great that large scale reformation was required. Sin had corrupted the church. This is why the apostles warned of idolatry in the church. John wrote, “Little children,  keep yourselves from idols” (1 John 5:21). Paul warned the Galatian church, “I am astonished that you are so quickly deserting him who called you in the grace of Christ and are turning to a different gospel” (Galatians 1:6).  If the church can be corrupted by sin in the first century, then it could happen in the sixteenth and the twenty-first!  We should remember the Reformation because, according to the gospel of Jesus Christ,  we need reformation today.

The Reformation reminds us that following Jesus faithfully is costly. Luther had to be kidnapped to escape death. Tyndale was burnt. Patrick Hamilton was slowly roasted. Lady Jane Grey was beheaded.  Many other lesser known or unknown Protestants had to flee their homes and their countries because they wanted to follow Jesus and not the world. To follow the Word of God in the gospel was costly. It required faith to obey the command of Jesus himself who said, “If anyone would come after me, let him  deny himself and  take up his cross  daily and follow me” (Luke 9:23). The martyr stories may be famous, but the lesser hardships are forgotten.  The Reformation created a refugee crisis as people fled oppression because they loved the gospel and God’s Word in their own language. John Knox went to Calvin’s Geneva, not as a tourist, but as a refugee!  When we remember the Reformation, we are reminded of the great cost of following Christ. We can remember the witness of the Reformers and of the Scripture that says of them, “ they have conquered [the Accuser] by the blood of the Lamb and by the word of their testimony, for  they loved not their lives  even unto death” (Revelation 12:11).

The Reformation reminds us that God can awaken, save and change people. What is amazing about the Reformation is that it cannot be explained in merely political or sociological terms. There were power-plays in the courts of the German Emperor Charles V and the English King Henry VIII. There were migrations in Europe as people moved from farms to towns and cities. There were technological changes like Gutenberg’s printing press. But these cannot explain how diverse people would come to the same gospel convictions from different nations, different stages of life, and different social classes.  Compare the college-aged royally connected nobleman, Patrick Hamilton in Scotland to the middle aged military chaplain, Ulrich Zwingli in Switzerland. Or the rough talking miner’s son, Martin Luther in Germany, with the cerebral humanist scholar John Calvin from France. God awakened and saved these leaders and the many, many people who read Tyndale’s English or Luther’s German translations. Protestant preaching lead to waves of conversions (Romans 10:14). The Reformation was a revival. As our own day looks so spiritually dark, we should remember that God awakened Europe in the Reformation, and he can do it just as dramatically today in our society.

When it comes to the Protestant Reformation, let’s not be like the forgetful people after the ‘celebration of life’. Instead let’s pray like the Psalmist did, “I will remember the deeds of the Lord; yes, I will  remember your wonders of old” (Psalm 77:11).