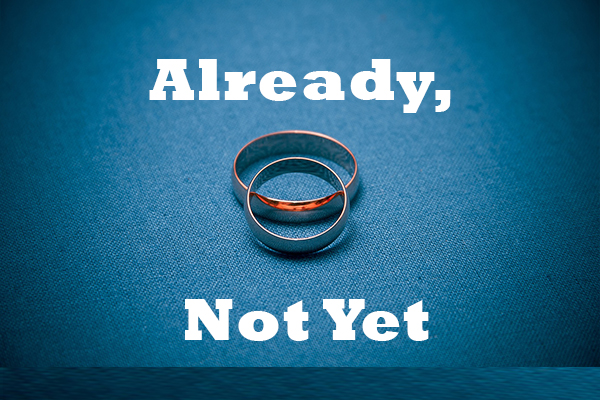 Since 1967 the experience of hockey fans in Toronto has been to plan spring Stanley Cup parades during the fall training camp. The promise of each Maple Leaf prospect gives the longsuffering fans hope for the future. The talent of the tryouts and returnees at camp give an ‘already’ assurance of the ‘not yet’ of that far off Cup victory (elusive for Toronto, less so for Montreal and Edmonton (grrr), though even Calgary has a Cup (!) unlike Ottawa and Vancouver).

There are many things that we can view through this lense of promise and prospect or an already, not yet. When a blushing girl gets a ring from a nervous guy, that engagement symbol is a promise that they will marry. The couple has the promise already, but they must wait for their wedding day which is not yet.

For hockey teams or happy couples, the already/not yet is filled with hope. They are eager in anticipation during the in-between time. But we know that the Leafs haven’t won the Cup and many engagements are broken off before the wedding. Promises of prospects aren’t always kept. Knitted hearts are torn apart. Ankles are broken as fans jump off the bandwagon.

How different it is to consider God, the being who makes promises with the ability and longevity to keep them. God is not like us. When God makes a promise he keeps it. That is what the Scriptures are for. They are a record of God’s promise making and promise keeping.

When the original human beings revolted against their Creator, God made promises to them, one of which was very hopeful. God said that Eve’s descendent would wreck Satan, even crushing his head (Genesis 3). That hopeful promise was already in Eve’s hand, even though the arrival of that prospect didn’t come in her lifetime.

So God’s people had promises of ‘the seed of Abraham’, ‘a prophet like Moses’, a son of David, ‘a suffering Servant’ and more.

The Middle Eastern Israelites had to wait for these promises to come to pass. And they thought that when the promise of the special, anointed hero would come, the end would come too. They thought the world would be fixed, injustice would end and the good guys would win.

But God did something surprising when he fulfilled the promises. He made the final fulfillment a dramatic example of the ‘already/not yet setup.

Jesus of Nazareth came as a fulfillment of those promises, bringing the kingdom of God with him. The kingdom had come, but was also yet to come. It was more than just the promise of the coming kingdom. In Jesus the Son of God, the power and presence of God’s rule and reign busted out on the earth. It was the ‘presence of the future’ (GE Ladd) and the kingdom had become the ‘now’ guaranteeing the ‘not yet’. There was this overlap of ages. Or to put it in big words, the kingdom was inaugurated, without being consummated.

This was difficult for first century folks to grasp, because they assumed the kingdom was more like a Vegas wedding; getting hitched on arrival. Or they were like Leaf fans after the season opening win expecting to be handed a trophy.

But the already and not yet of Jesus kingdom serves a few purposes. First, God’s people are forced to live by faith, not by fad. Many people love to jump on the bandwagon when things are trendy. If the kingdom came all at once, many people would flock to it like the latest hip eatery. They want to see and be seen. That’s not how the kingdom works. Since the kingdom’s power is largely unseen, it’s only visible in changed lives. That’s why the Scriptures speak so often of fruit. No one sees how the fruit grows inside. They just see the change on the outside. Besides, everyone who follows a fad ends up dropping it. The kingdom of God has both ability and longevity to last when the rest of the world is damnable and eternally uncool.

The second is that the kingdom is meant to bring disciples to glory. That means that Jesus, the captain or forerunner has gone ahead of us, and we follow him through the trials and triumphs of this life, trusting in his promises and prospects. The now guarantees the not yet. He was raised for our justificaiton. And our lives are ‘hid with Christ in God’.

We will be in the holy victory parade if we believe in Jesus’ and his kingdom now. Unlike the Leafs or the broken engagement, Jesus promise and power now, guarantees the not yet of euphoria and ecstasy in heaven forever.