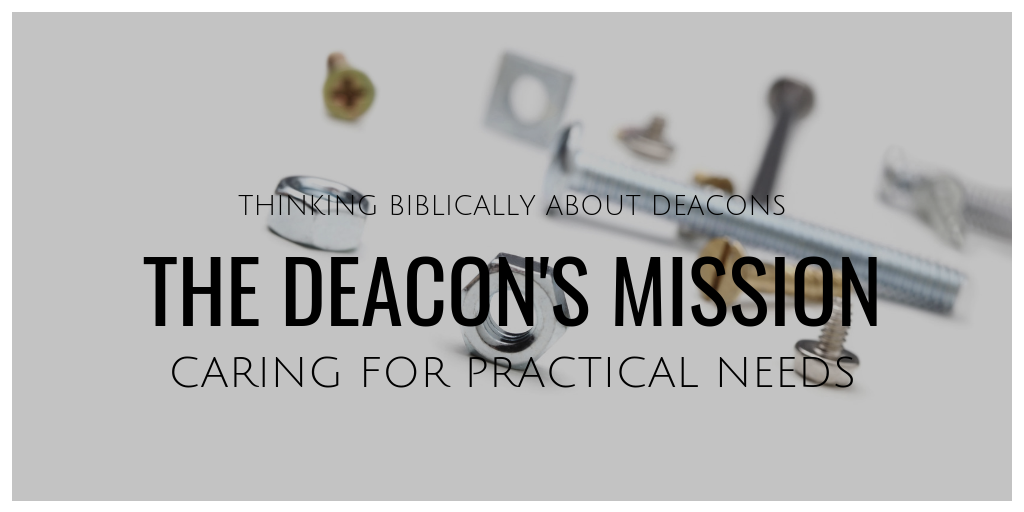 Last week, we looked at the first of three important truths about the office of deacon: the fact that the New Testament office of deacon is given by God with the intent of fostering unity in the local church. This truth, as well as two others—the second of which we’re looking at in this article—are all drawn from examining the problem faced by the Jerusalem church in Acts 6, a problem which prompted them to install the Seven as the first deacons.

The problem in Acts 6 was, as we saw, the threat to unity posed by the way that the church was distributing money for relief of the poor. The church was facing a potential fracture on cultural lines, because it was widows in the church’s Hellenistic community who were seemingly being neglected, and the Hellenists were blaming the Hebrews as a result. There was more than just a cultural issue in this church; the catalyst or irritant that provoked the cultural division, that is, the manner in which the distribution of money was being handled, was itself an issue. The way Luke introduces this account suggests that underneath this problem was growth. Acts 6 comes four chapters after the start of the church in Jerusalem in Acts 2, where after Peter's sermon more than three thousand people come to Christ. That is a staggering number. And the church didn’t stay at three thousand, for Luke emphasizes, again and again, that this first church was growing and growing. In Acts 2:47 he writes: “The Lord added to their number, day by day, those who were being saved.” In Acts 4:4, Luke goes on: “many of those who had heard the word believed, and the number of the men came to five thousand.” That’s just the men, by the way, not the women or the children. In Acts 5:14, he continues: “and more than ever, believers were added to the Lord, multitudes of men and women.” This is the backdrop for Acts chapter 6 and the story of the Seven. Luke begins this section with the words, “Now in these days, when the disciples were increasing in number.” Well, just like any other group of people when it gets larger, problems began to surface in this church.

The apostles recognized two things. First, the answer to this problem was to “set aside,” or dedicate, people to solving it (our focus in this article). Second, they themselves couldn’t be those people (that's next week, God willing!). It’s important to note that by establishing their own priority as being the ministry of teaching and prayer, they are delegating responsibility for caring for practical needs to this new office of deacon. Both ministries—that of word and prayer, and that of “tables” or serving the church’s practical needs—require dedication and focused attention, people appointed to formal office and recognized as having responsibility to deal with their ministry.

This, then, clarifies what the deacon’s mission is. Deacons are not the governors or rulers of the church; later in this series, we’ll look at how the way deacons are appointed shows the common “rule by deacon board” model is unbiblical. Deacons are not teachers, either, as Acts 6 and the qualifications of deacons (which we’ll also see in a later article) make clear. No, deacons are “table servants.” In the narrative of Acts 6, we see that this meant literally feeding people. However, whether it’s dealing with food distribution, or taking care of a building, or helping with baptisms, or any other practical need that might either threaten unity if left unattended or threaten the elders’ ability to preach and pray, the principle established by the apostles of delegating non-teaching and -prayer ministries to non-pastoral office-bearers is broader than simply mercy ministry, and still defines deacons today. The mission of the office of deacon is to care for practical needs in the local church.