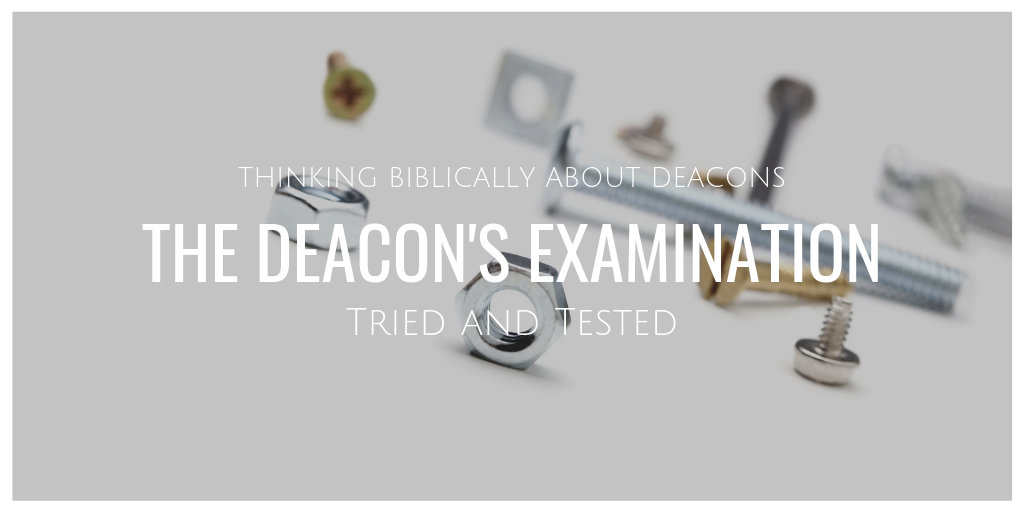 The Bible lays out, in Acts chapter 6, three important components of the process by which deacons are to be appointed for service in a local church. Acts 6, as we’ve seen, does not go into great detail, probably for two reasons. First, Luke’s main interest is the “big picture” of the Holy Spirit advancing the Word of God from Jerusalem to the ends of the earth. And second, Luke is recording the very first instance of deacons in a church, and the office probably was further detailed and defined afterward—after all, the Seven are not even called “deacons” in Acts, as that title was probably fixed later on. Luke describes the congregation “picking out” or “choosing” the Seven but gives no specifics about how this took place.

As with the qualifications for deacons, when we turn to Paul’s instructions in First Timothy chapter 3, we find more details given. Paul directs that “let them be tested first; then let them serve as deacons if they prove themselves blameless” (1 Tim. 3:10). It’s tempting to read this testing as practical—that is, as “trialling” the candidates in their intended roles or otherwise giving them opportunities to demonstrate their skills and aptitude for their area of service. While this kind of testing probably shouldn’t be excluded, the word used here, a form of dokimazo (to prove or put to the test) is usually used by Paul to refer to character or spiritual testing. Other places the Apostle employs forms of this word include: First Corinthians 3:13, referring to fire that tests the quality of a leader’s ministry results; First Corinthians 11:28, referring to the duty of every Christian to examine himself before the Lord’s Supper; Second Corinthians 13:5, where Paul commands believers to test themselves to ensure they are truly believers; and twice in First Thessalonians 2:4, referring to God’s approval of his (and his team’s) fitness for ministry and testing of their hearts. It would seem reasonable to conclude, especially in light of Paul’s emphasis on spiritual fitness in the qualifications he describes in the rest of First Timothy 3, that Paul’s main concern is that the character and maturity of the deacon is the main focus of this examination and testing by the assembly.

One conclusion we can draw from this observation is that character, even more than competence, is crucial. This is not to deny that a deacon needs to be competent in the practical responsibilities he is given. Rather, it means that simply installing a deacon because they have skills, while overlooking glaring immaturities or deep character flaws, would be a failure to properly test the candidate. After all, Paul concludes this command for testing with a description of the result he desires: “if they prove themselves blameless.” Blameless means not perfection (as if that were attainable) but one in right standing before God, who has dealt with and continues to deal with his sins and imperfections.

Again, when we remember that the intent of the deacon’s office is not first efficiency but rather church unity, this makes sense: a spiritually mature, though perhaps less skilled or experienced, man makes a better candidate than a “rock star” in, say, the business world who is a mere infant in his Christian walk. So churches need to try and test the character and maturity of their deacon nominees prior to their appointment by the elders, a process that requires time and familiarity. That’s the deacon’s examination.