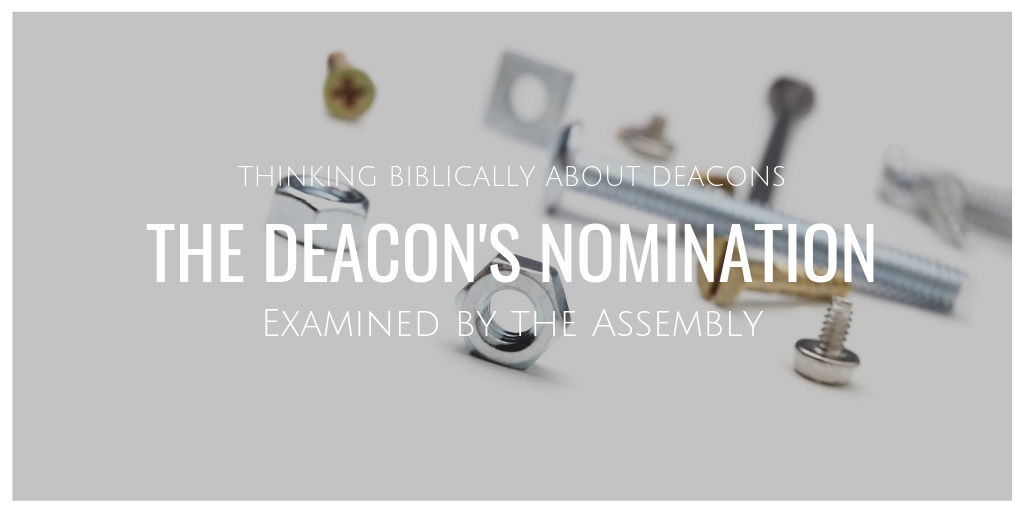 Last week, we saw that the first step any church needs to take, when faced with a problem that might call for installing deacons, is one of definition. I argued that the elders of the local church, as those in the best position to both evaluate the state of the church as a whole and to gauge their own level of distraction from their core ministry of Word and prayer, are to lead the church in this process of definition. Once the elders and the church have appreciated the nature and scope of the problem and defined how deacons can address it, the next step is one of nomination.

It’s interesting how, in Acts chapter 6, the apostles, as elders of the Jerusalem church, describe to the congregation how the deacons are to be installed. Having summoned the congregation and defined the problem (“it is not right that we should give up the preaching of the Word of God to serve tables”), they then specify two things that need to happen. First, candidates are to be chosen from among the congregation. We know they are, at that point in the process, candidates only, because of the second step, where the apostles reserve the final decision to themselves by saying “whom we will appoint to this task.” The “choosing” of the Seven from among the congregation, then, is a process of nomination. The fact that the apostles reserved the final call on whether to “lay hands” or not underlines a fundamental principle operating in the background of Acts 6: as overseers of the church, as those accountable directly to God for the care of souls, the responsibility to “sort the problem” does not belong ultimately to the members, but rather to those entrusted to lead them as part and parcel of pastoral care for them.

That said, the very nature of the problem facing the Jerusalem church, and the apostles as pastors in particular, also needs to inform how we interpret what is happening here. These pastors are already overwhelmed. They have already found themselves doing more than they should, and their core ministry is suffering. So, even if their authority might have permitted them to simply appoint seven men of their choosing without involving the congregation, the nature of the problem and the need to delegate responsibility compelled a different approach. Rather than permit an unhealthy and unbiblical clericalism to develop in the church, with the congregation increasingly looking at their elders as those who “do the work of ministry for us,” the apostles wisely activated the entire membership of the church instead. In this case, they directed the congregation to nominate the candidates; since elders are also part of the congregation, elders might decide to make the nominations themselves. In a very large congregation such as in Jerusalem it’s quite possible the apostles simply could not have known everyone who might be qualified, meaning a congregational nomination might have been better than the apostles choosing directly; on the other hand, there will be times when the elders have specific candidates in mind, perhaps because of demonstrated fitness for a particular role. Either way, however, the entire congregation is actively involved in examining the candidates against the standard given by the apostles. One of the responsibilities and privileges of church membership is to assess candidates for office, applying the biblical qualifications to those nominated. After all, “in an abundance of counselors there is safety” (Prov. 11:14), and so a wise eldership will actively seek congregational input on the fitness of deacon candidates, regardless of whether the nomination originated with the elders or from the membership.

Biblical deacons, then, are to be examined by the assembly. That’s at the heart of the deacon’s nomination for office.