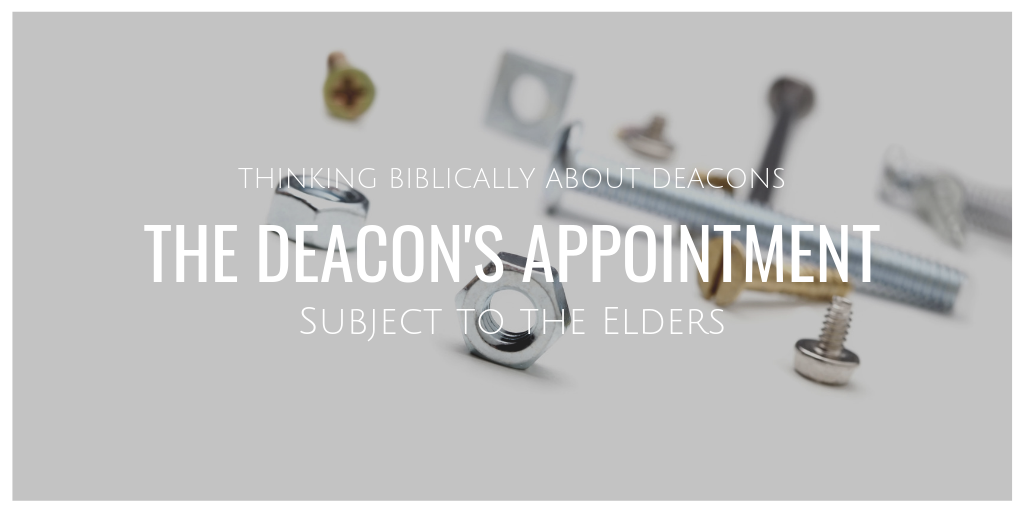 The final step in the examination and installation of a potential deacon is described in Acts chapter 6, verses 3 and 6: “pick out from among you seven men…whom we will appoint to this duty” (v. 3)….”these they set before the apostles, and they prayed and laid their hands on them” (v. 6). Far from a ceremonial gesture, this final step is actually crucial.

What is this “laying on of hands”? The Old Testament background of the act begins with instructions in the Law for a priest or for another Israelite presenting an offering for sacrifice to lay his hands on the animal being offered prior to its slaughter (cf. Ex. 29:10-19; Lev. 4:15; 16:21), suggesting an idea of personal or corporate identification or solidarity with the sacrificial victim. In at least one case this laying on of hands is done to one convicted of blasphemy by witnesses to his offence, prior to his stoning (Lev. 24:10-16), suggesting an idea of personal or corporate approval of the fate of the victim. One of the most interesting texts for our discussion of deacon installations is Deuteronomy 27:12-23, where Moses is told to take Joshua, his successor, and in front of the congregation “lay your hand upon him….and you shall commission him in their sight” (vv. 18-19; cf. 22-23). This text emphasizes the idea of public endorsement and commissioning for service. When we look at the New Testament, we see the laying on of hands not only employed by the apostles on believing Samaritans and on John the Baptist’s disciples to receive the Holy Spirit (Acts 8:17; 19:6)—in both cases, an act of identification and endorsement of their inclusion in the church and the New Covenant—but also by the leaders of the church of Antioch in commissioning and sending Paul and Barnabas away as missionaries (Acts 13:1-3). The act of laying hands on someone, then, has the general sense of a personal approval and endorsement by the one laying on hands, and endorsement and commissioning of the one who is subject to the laying on of hands. It certainly includes the idea of publicly formalizing an appointment, but given the strong theme of solidarity and identification and approval in many of the texts, laying on hands needs to be seen as something far deeper and more meaningful than a mere outward ceremony.

That last point is confirmed by the only New Testament text giving instructions about laying hands on others. Paul, in the same letter to Timothy from which we have drawn so much of our understanding of deacons, gives his young protege a warning: “Do not be hasty in the laying on of hands, nor take part in the sins of others; keep yourself pure” (1 Tim. 5:22). The act of laying on hands, then, is not a mere ceremonial ratification by representatives of a decision made by others. It is a serious responsibility entrusted to elders in a local church, one that they must exercise with wise discretion. Indeed, laying on of hands essentially represents and sums up the entire process of nomination and examination. If the elders cannot in good conscience see a candidate commissioned on their behalf, receive their endorsement, or be identified with their ministry, they have a duty before God to refrain. If they do not, the sins of the one they appoint to ministry are "shared" by those who appointed him. And since service as a deacon (or missionary, or elder) requires such a public endorsement by and identification with the leadership of the local church, it follows that the elders have the final say on whether to appoint the candidate.

Since, as we’ve seen, the elders are responsible to initiate and guide the process of a deacon’s nomination and examination by the congregation, as well as to make the final decision on whether they will be appointed, it means deacons are, in the final analysis, subject to the elders of the local church. That’s why deacons are, at the end of the process, appointed by the elders.