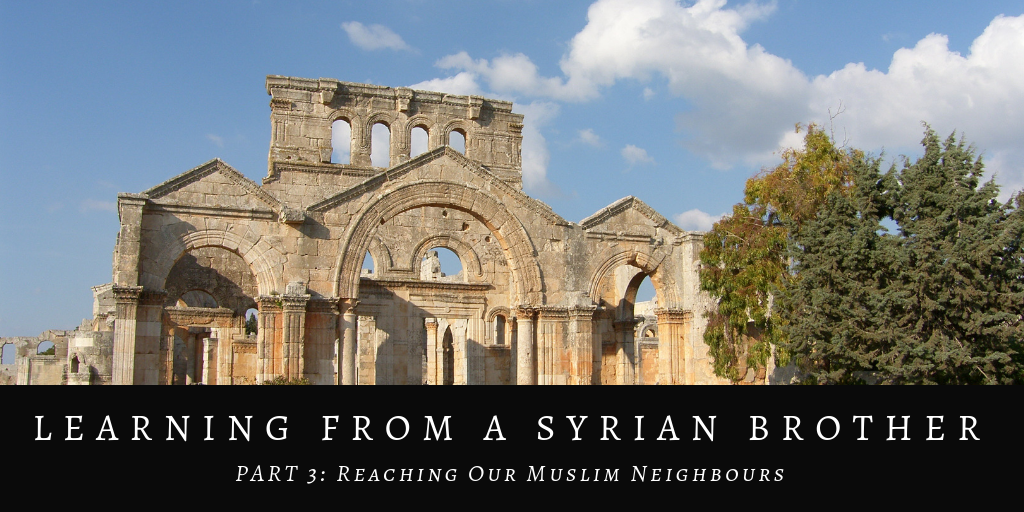 A few weeks ago, a number of pastors from around the Calgary area gathered at Calvary Grace for a monthly Gospel Coalition Prairies Pastors’ Meeting. At that event, we were blessed to hear from a Syrian Baptist minister now serving in Calgary. Some of you will remember this brother’s presentation on evangelism to Muslims, which he gave to us a couple of months ago. In this final article, I wanted to pass along, briefly, a few practical suggestions he made to help us reach Muslims, and particularly new arrivals in Canada.

Our brother stressed the fact that life for a refugee arriving in Canada from Syria is “very difficult.” Yes, they are out of immediate danger. But they do still need help adapting to life in Canada. They must learn the language, find furniture, and arrange transportation. Jobs can be found but many are merely “survival jobs” and don’t provide enough money.

Does that mean churches should emphasize “social work” concerns? Surprisingly, our Syrian brother pointed out that there is “lots of help available” for things like translation and furniture. Between the immigration societies and community services, there are many ways for refugees to find help. No, our brother stressed, “What they need is for you to share the Gospel—and not in the Canadian way.” You may recall in the last article that he criticized the Canadian tendency to avoid any possibility of offence or discomfort out of politeness—this is why he made that point. He is concerned that Canadian Christians are so afraid of offending anyone that we don’t share the Good News with those who need it.

In the case of refugees from the Middle East, he pointed out, they come from a place where people talk openly about religion. It is not a taboo subject. So, he urged us, talk about it with Muslims! Especially in the period shortly after they arrive, for as both he and another pastor present who immigrated from abroad pointed out, new arrivals tend to absorb and assume the Canadian unwillingness to talk about these things after a while.

Invite them to church, our brother urged us. Especially in the Christmas season, ask them to come to special events like Christmas Eve. You would be surprised at their willingness to come. Be prepared to share your faith. Practice sharing the Gospel. For Muslims, this brother stressed, have a New Testament handy and give it to them.

Finally, offer to pray with them! This pastor was talking with a Middle Eastern family just moved to Calgary from Newfoundland, and in his first visit he offered to pray for them. He pointed out that now this family knows to expect this from him. The Gospel and the Christian life will be part of their dealings with him.

Let’s ask the Lord to give us both opportunities to reach out to Muslim neighbours, and the boldness to seize them.