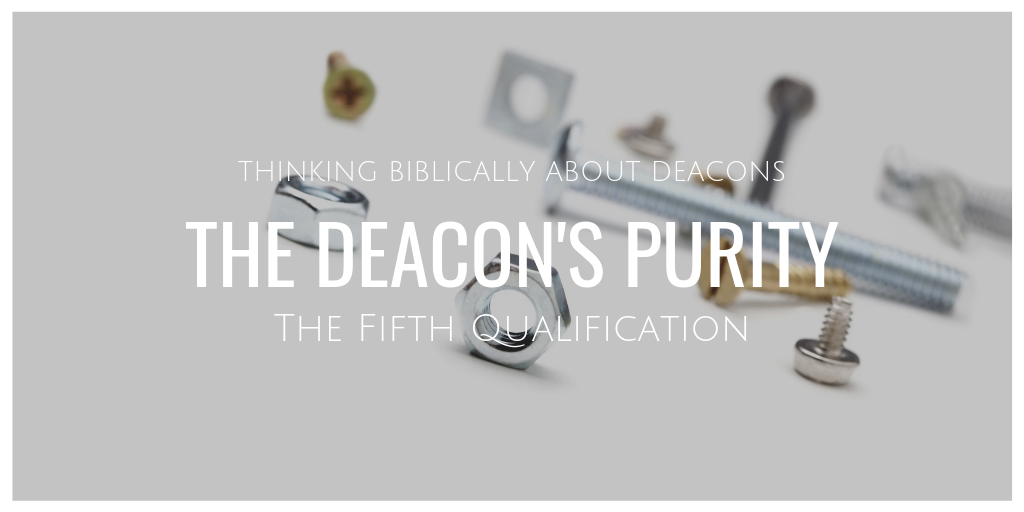 We’ve seen how the apostles, in Acts chapter 6, laid out qualifications for the officers who later became known as deacons. We’ve studied how the apostle Paul reiterates and expands on those same qualifications in his teaching on deacons in First Timothy chapter 3. Given how close Paul was to Luke, the author of the book of Acts, it’s no surprise that Paul repeats or refers to every one of the qualifications found in the account of the Seven’s installation. There is only one qualification Paul mentions to Timothy that is not found in Acts 6, and it is that qualification we now turn to examine: the deacon’s purity.

After expanding on the qualifications of reputation, maturity, wisdom, and faith, Paul closes his list of deacon qualifications with this statement: “Let deacons each be the husband of one wife, managing their children and their own households well” (1 Tim. 3:12). We’ve already seen how the second clause of that sentence, referring to parenting and household management, is really an expansion on the requirement for deacons to have the kind of godly wisdom expounded in the book of Proverbs. Our focus at present, then, is the “husband of one wife” qualification found in the first half of the statement. The emphasis here is not on the word “husband,” as if to require—as some erroneously believe—that the candidate has to be married. A more literal rendering of the underlying Greek is “one-woman man,” similar to the corresponding qualification for an elder in First Timothy 3:2; since Paul—a single man—was himself an elder, and since the elder's exemplar, the Chief Shepherd Jesus Christ himself, was unmarried, there is no reason to interpret this qualification as requiring marriage. Grammatically, the qualification as written does assume that the deacon under discussion in 3:12 is male, but in its context, given that a distinct though still parallel set of qualifications was just provided in verse 11 for “women” (a parallel set that is conspicuously—and I think meaningfully—absent from Paul’s discussion of elders), it should not be interpreted as restricting service in the diaconate to men only. Rather, verse 12 should be read as addressing the men (“deacons”) particularly, though not exclusively.

What is the point of this command, if the deacon may or may not be married? Paul’s concern is not the status or state of the deacon, but rather the candidate’s character. Is this person pure and holy in relationship to the opposite sex? If married, is the candidate “faithful in all things” as Paul commanded the women, a mandate that surely includes their marital faithfulness (and anticipates Paul’s return to addressing the men in the next verse)? If single, does the potential deacon treat “older women as mothers, younger women as sisters, in all purity” as Paul reminds Timothy later in the very same letter (5:2)? In other words, the deacon is required to be a one-woman kind of man, whether single or married. Sexual purity, then, is the deacon’s fifth qualification.