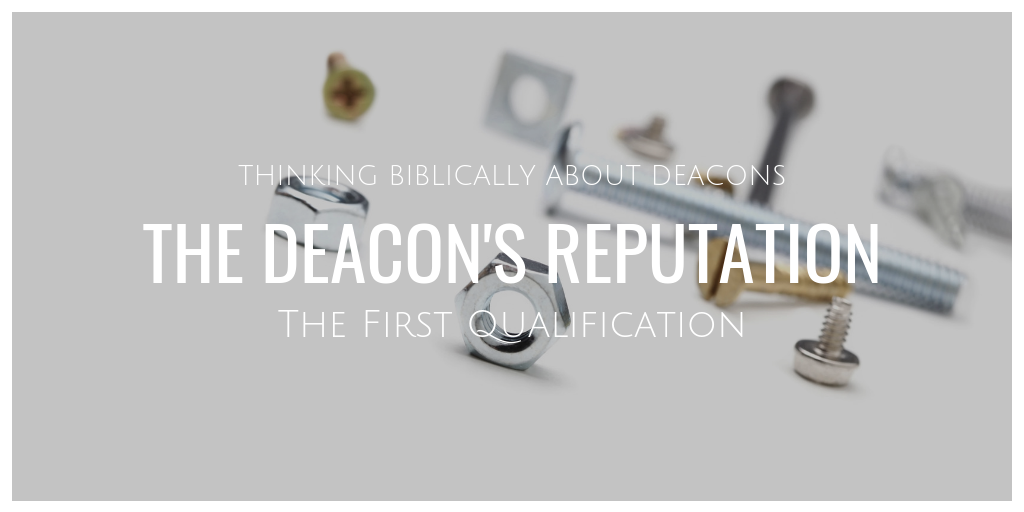 Now that we’ve looked at the intent, mission, and objective of the New Testament deacon, it’s time to look at what kind of Christians fill this office. What are the qualifications of those called to be deacons? God willing, we’ll spend the next several articles in this series looking at what characteristics a church should be looking for in a potential deacon.

The apostles, in Acts chapter 6, lay out three things they were seeking in those whom they would hand over the ministry of care for practical needs: being of good repute, full of the Spirit, and full of wisdom (Acts 6:3). To that we can add a fourth from this account, being filled with faith as Stephen was (v. 5), a qualification that Paul repeats in First Timothy 3:9. It’s my belief that Paul, in that letter to Timothy, basically unpacks and details the very same qualifications given by the apostles in Acts 6.

First, then, the deacon must be of “good repute.” What does that mean? Paul, in First Timothy 3, begins his deacon qualifications with the statement “Deacons likewise must be dignified, not double-tongued…” The “likewise” refers back to the qualifications of an elder given immediately beforehand, and specifically the requirement that “he be well thought of by outsiders” (3:7). Is the candidate recognized by outsiders as being different from most other people? Is he transparent and honest in his dealings? When he sins, does he confess and repent of it rather than hide it? Other qualifications mentioned by Paul to Timothy also reflect this requirement for a good reputation: a deacon cannot be a drunkard, given to excess in consumption or enslaved to a habit; moreover, he cannot be greedy, seeking to enrich himself at others’ expense or in underhanded ways (3:8). Being a drunk or greedy would certainly impact one’s reputation.

What would happen if a deacon had a poor reputation? The congregation would wonder if the deacon would be self-controlled in carrying out the functions of the office. If this man is a drunk, is he going to be sober and focused when he is making decisions? If he is greedy or dishonest, will he be stealing church money like Judas Iscariot stole from the disciples? A poor reputation would undermine confidence in the work being done, and would actually begin to erode congregational unity.

Deacons represent the church to outsiders, represent the elders and the congregation in carrying out their responsibilities, and represent the Lord Christ in all they do. Therefore, the deacon’s first qualification is a good reputation.