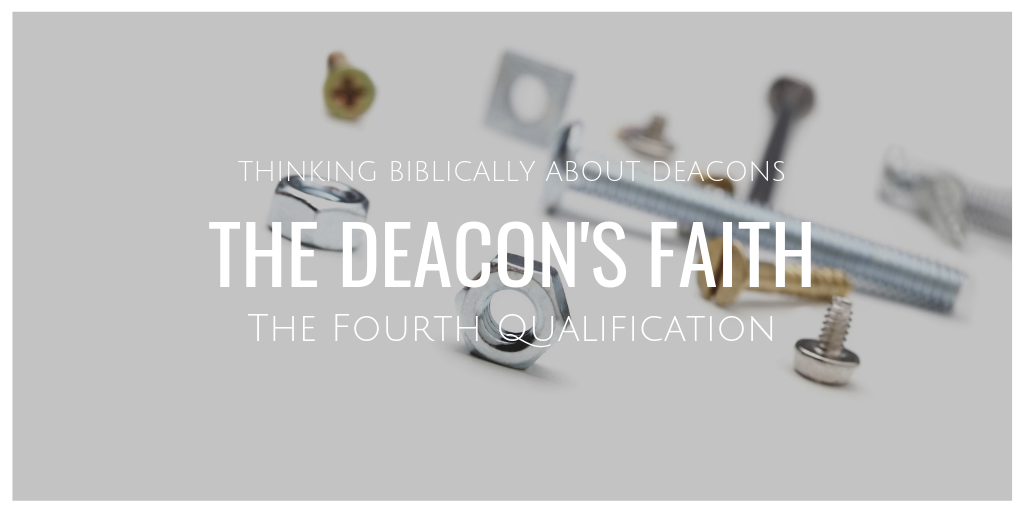 As we’ve seen so far, deacons are charged with the care of practical needs in the church. They need to be wise and to have a good reputation. Deacons are not elders, however. They do not teach or exercise authority over others. This combination of a practical, nuts-and-bolts focus and a separation from doctrinal and pastoral oversight ministry might tempt a church to overlook the piety and conviction of a candidate. That would be a grave mistake.

While the apostles, speaking in Acts chapter 6 and its account of the first deacons, don’t explicitly mention faith as a qualification, it’s plain from the immediate context that it is important. Stephen, the first of the Seven mentioned, is described as not only “full of…the Holy Spirit” but also “of faith” (v. 5). The faith of Philip, the second of the Seven mentioned, is made clear in Acts 8, where after being forced to flee Jerusalem Philip takes the opportunity to proclaim Christ—and not to just anyone, but to the hated Samaritans and to a Gentile eunuch. The congregation of the Jerusalem church, having been instructed to nominate men of good repute who were full of the Spirit and wisdom, selected men who were marked by faith as well. A vital, living faith is at least implied by the first three qualifications; indeed, they probably depend on having such faith. And so when we return to our “parallel passage” about deacon qualifications in First Timothy chapter 3, it’s no surprise to see that Paul makes a strong, solid faith an explicit requirement: “They must hold the mystery of the faith with a clear conscience” (1 Tim. 3:9)—that is, their convictions must be clear and stable, not shifting with doubt or uncertainty or tainted by error or heresy. Even more, the reward Paul promises in verse 13 to deacons who serve well is not only “good standing for themselves” but, interestingly, “great confidence in the faith that is in Christ Jesus.” Not only is such faith a prerequisite for deacons, then, but growth in that very faith is a benefit of diligent service in that role. Needless to say, one cannot grow in what he does not already have, which only underlines how important such faith is for diaconal candidates. After all, if you don’t exhibit such faith, you’d be hard-pressed to benefit from the role personally anyway.

As encouragements to others and as examples to the rest of the church of self-sacrificial, Christlike service, deacons need to confess the Christian faith with a clear conscience. That’s why being full of faith is the deacon’s fourth qualification.