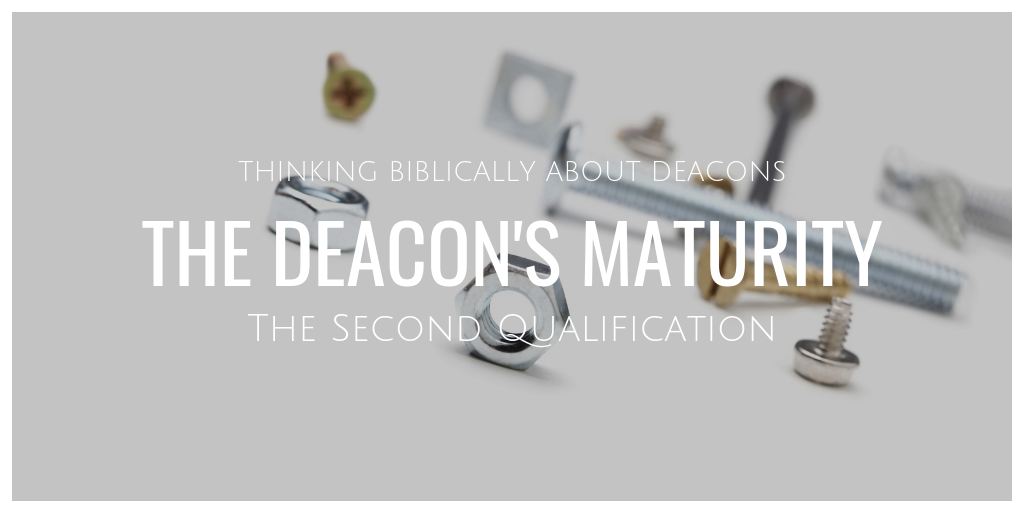 Having seen last week that the first qualification of a potential deacon is a solid reputation, we now turn to look at the second qualification found in Acts chapter 6: being “full of the Spirit.” Of all the qualifications, this one is perhaps most at risk of being misunderstood in the present day. What does “filled with the Spirit” mean?

In this context, it clearly cannot mean simply being indwelt by or possessing the Holy Spirit. On the one hand, the Bible makes clear that every Christian has the Holy Spirit. God, through the prophet Ezekiel, declares that the day is coming when “I will give you a new heart, and put a new spirit in you” (Ezek. 36:26), language echoed in Jeremiah’s prophecy of the New Covenant (Jer. 31:31-34) under which the New Testament tells us every Christian, Jew and Gentile alike, is bound to Jesus Christ in his death and resurrection (cf. 1 Cor. 11:25). It’s for that reason that Paul can tell the Corinthian believers that God has “given us his Spirit in our hearts as a guarantee” that he will keep his covenant promises (2 Cor. 1:22; cf. 5:5). On the other hand, the apostles in Acts 6 use the term “filled with the Spirit” to describe something that sets apart these candidates from the congregation as a whole. Clearly, then, there is a difference between possessing or being indwelt by the Spirit—which is the privilege of every born-again believer in Christ—and being filled with the Spirit.

Does being “filled with the Spirit,” then, mean some kind of “second blessing,” conferring “spiritual super powers” such as being able to do miracles on demand or work signs and wonders? Some modern ideas of being “Spirit-filled” would suggest just that; even more, Stephen, one of the men chosen, is later described as “doing great wonders and signs” (Acts 6:8). However, this interpretation of “filled with the Spirit” fails to fit the context of the examination and appointment in Acts 6:1-7. The ministry of these Seven as servants or deacons would be primarily internal, inside the church, rather than being evangelistic or apologetic in nature, and even more it was intensely practical, fostering unity and taking care of administrative needs in the congregation. While it’s plain God used Stephen (and Philip) in a powerful evangelistic capacity outside the church, their ministry in those areas was not in their office or capacity as deacons. It’s difficult to see how the ability to work signs and wonders would better prepare, much less be a requirement for, a candidate for the diaconal ministry described in verses 1-7.

As with the qualification of a good reputation, Paul’s “parallel” list of deacon qualifications in First Timothy 3 helps shed some light on this phrase—especially in conjunction with Paul’s own use of the idea “filled with the Spirit.” Paul’s qualifications of a deacon include being “not addicted to much wine” (1 Tim. 3:8); this is echoed in his “women’s” qualification “sober-minded” (3:11). With those qualifications in mind, it’s extremely interesting to see how Paul himself uses the phrase “filled with the Spirit” in Ephesians 5:18. There, he contrasts drunkenness with being “filled with the Spirit.” At the very least, then, we see that being Spirit-filled means being sober-minded and self-controlled, not addicted to much wine. However—and this is important—Paul goes on to elaborate what being “Spirit-filled” means in Ephesians 5:19-21. In verse 18, the term “be filled” is in the imperative (a command), and in the following three verses, Paul uses a series of five participles (“addressing,” “singing,” “making melody,” “giving thanks,” and “submitting”) to explain what that command to “be filled with the Spirit” actually looks like in practice. (Some of you may remember that the Great Commission in Matthew 28 has a similar structure, with a central command [“make disciples”] further explained in three participles [“go,” “baptizing,” and “teaching”]).

So what does it mean, then, to be “Spirit-filled”? At the risk of oversimplifying, it basically means being a mature Christian, one who is characterized by the work of the Spirit in his life. In practice, it means to be sober-minded and self-controlled, and it also means addressing each other with psalms and hymns, praising the Lord, giving thanks, and submitting one to another. In other words: by being Spirit-filled, a deacon is to be an encourager, a worshiper, an example of thanksgiving, and submissive to rightful authority, all things that foster unity in the church. That’s being filled with the Spirit, and that’s the deacon’s second qualification.